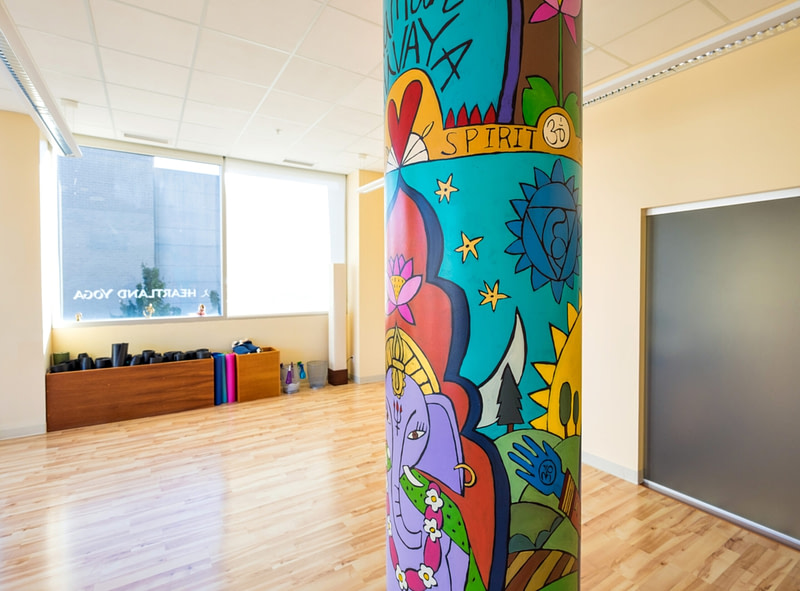 Transforming the Eye Sore Into Art

Today is a new moon.  I always get wistful at the new moon as it represents a fresh start.  Time to let things go, clean house, purge, make space for something else to come in.

This past month has been rough, not only for me personally, but also for our nation.  We have all been adjusting to unexpected outcomes and strong emotions.  I’m ready to release what has happened and move forward.

I admit I’m someone who has repetitive fantasies about being the renegade who sells her house, leaves her comfortable home life, and moves off to Tahiti for a brand new life, in a new land, with a completely new troupe of players surrounding me.  I often feel the itch for change. Especially lately…I’ve been wanting a major shift in my life but haven’t been able to pinpoint exactly what this means, much less what it would look like if it really played it out.

Rather than throwing out the baby with the bathwater and leaving behind a life that has so many great aspects, what if I just slightly altered the things that aren’t working for me?

I taught this morning on the new moon.  We did lots of twists to wring out the old stress and tension, and restorative pose at the end to welcome in the new thing we want to bring in.  As my students were resting, I found myself staring at the colorfully painted pole in the middle of my studio.  I saw the words “Om Namah Shivaya”.  I smiled at the flying OM symbol.  I looked into the eyes of Ganesha holding his palm up as if to say, wait, don’t throw it all away.  Be patient my friend.  All good is coming.

A few years ago, I thought about selling my yoga studio and starting over.  Despite its huge windows, natural light, and great neighbors, there is a pesky pole right in the middle of the space.  I would love to knock it down, but it has the important job of holding up the roof, so this really isn’t an option.  Over the years, many people have commented on the pole and how it is placed in the most unfortunate of positions. I found myself apologizing about the location of the pole to newcomers.  Jokes were cracked about the big round thing in the middle of the room marring the view of the back row. 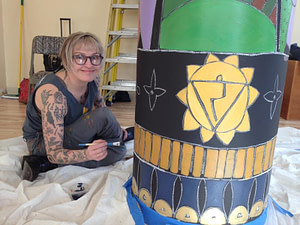 But instead of leaving the space on account of the pole, I decided to slightly alter things. I hired a well known artist whose work I admired to paint the pole.   She came in for a weekend and transformed an annoying eye sore in the middle of my space to a work of art that pulls people in, and has now become the centerpiece of the studio.

No more apologies about the pole.  Instead, people come to the studio just to see it.  People want to sit right in front of it to have Ganesha at their back, or sit behind it to stare into the eyes of Lakshmi, the Goddess of wisdom and abundance.  I routinely get pulled into it’s beauty at the end of class while my students rest in savasana.

I didn’t have to leave the space.  Just like I don’t have to leave my home, my town, or my family and move to Tahiti.  I need to get creative and think about how things can be slightly altered to become beloved works of art. 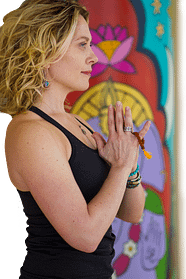 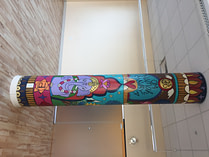